U16's win their Division and the Versatility Tournament! (17/18)

The U16's (Fireflies) topped off winning their division this season (17/18) with a win at the Versatility tournament.

Their performance at the tournament was made even more credible by the fact that the team consisted of 13, 14, 15 and 16 year olds. In addition to this 3 of the players from this team will be joining a team in the senior league over the summer, a great example of how Abbey have developed its players. 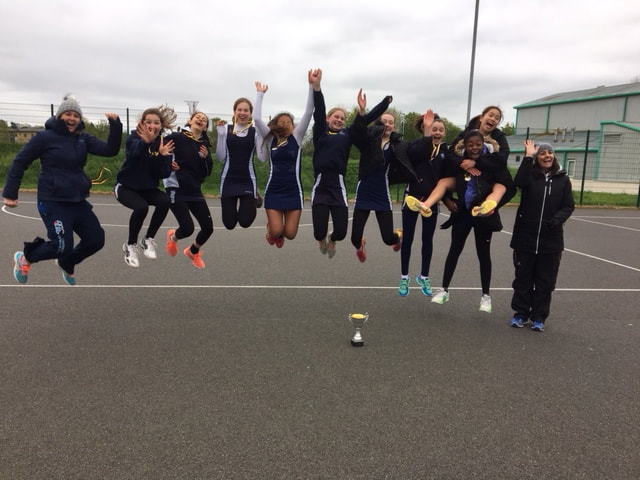 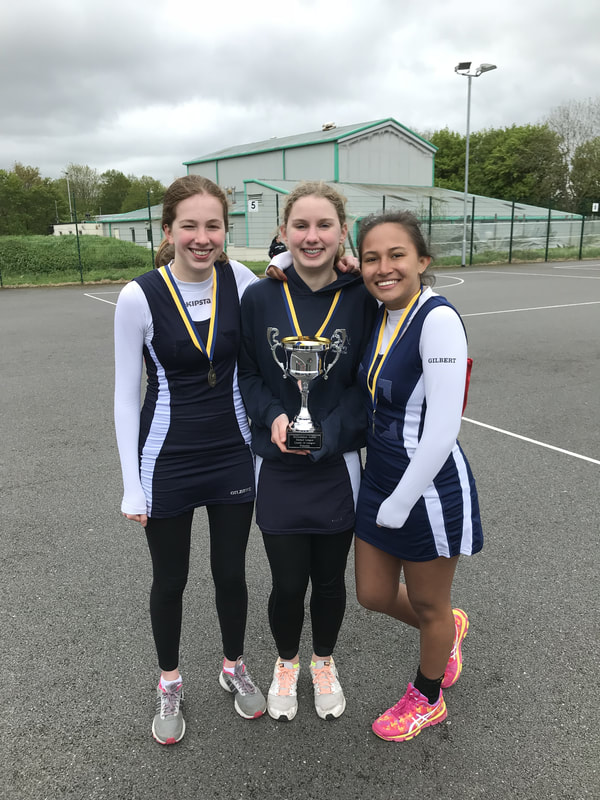 At around 1.10 pm, Lesley Williams completed her promised crazy, scary 10 minute ‘wingwalk’ - it’s actually a ‘wingsit’  but that’s doesn’t sound quite so challenging -  strapped in a rig on the top of a 1945 Boeing Stearman biplane at Chiltern Air Park, Ipsden near Wallingford.  A week on, she is still searching for the most accurate adjectives to describe the experience : surreal, stimulating, exciting….. but is not admitting to fun.

​'It was a sunny day so the view from 500 feet was beautiful.  We didn’t loop the loop but banked quite steeply several times and there was one dive, increasing the speed from 80mph to 130mph.  At that speed, it’s very windy (!) so waving is difficult and the worst problem was a runny nose! Thus the video taken by the wing-mounted camera shows several inelegant sleeve wipes!'

Lesley ‘won’ the flight in a Dorchester Festival online charity auction, which benefitted the Sue Ryder hospice, Nettlebed, and used it to raise funds for Christian Aid and for Oxfordshire Outdoor Learning Trust.   As at 11 September, she has more than £500 Christian Aid sponsorship and over £1,000 for OOLT : there is still time to add more!

​Contact the Oxford Office if you would like to donate to Christian Aid by sponsoring Lesley in retrospect!
Christian Aid  New Road Baptist Church Bonn Square Oxford OX1 1LQ
01865 246818 / oxford@christian-aid.org

The Abbey Netball Club awards took place at the Ashmolean Museum, an impressive setting for a night of celebration. The room was filled with over 100 Senior and Junior players plus their friends and family. The night featured awards for both the Senior and Junior teams amounting to over 40 awards! The cheers were particularly loud for the Junior award winners, it was great to hear the support for their fellow team members. Kate and Sue summed up the season beautifully, acknowledging the journeys of all the teams, including their highs and lows. The night also provided a great opportunity to thank all the committee members, parents, volunteers and supporters, without whom our club would not exist.
Award winners were as follows;

The second edition of our Player Profiles features Vicky Knowlden, a Storm player and Sue Lyons, an Ice Player
​1. Name: Sue Lyons
2. Team and position: Ice, GS
3. What's the one thing you can't live without? Sadly, my Blackberry, my life revolves around it.
4. Word for word, what was the last text message you received?  ‘Pls can you pick me up’
5. Most embarrassing moment? Accidently walking into a men’s loo; well not actually the walking in as it was empty when I went in. It wasn’t until I had to leave the cubicle, wash my hands and walk out that I was really embarrassed!
6. What/who is your biggest inspiration? My best friend Mairi. I always tried to be as smart (and cool!) as her.
7. What makes you laugh? Too many mojitos!
8. What have you always wanted to do, but never done?  I always wanted to be a ballerina. Sadly, I think it’s a bit late now – although never say never!
9. What are you passionate about? Education (and netball!) – excellent opportunities for all.
10. Where were you born? In a small village hospital in Usk (South Wales). Apparently there were only 3 beds!
11. Do you have any pets? We have a chicken called Toffee, she’s very friendly and will sit at my feet when I’m in the garden.
12. What is your favourite sport to watch?  Netball of course!
13. How long have you played for the club? 3 years in September.
14. What is your favourite pre-match meal? Scrambled eggs and smoked salmon
15. Top netballing tip? Lots of shooting practice - 100 shots a day!
16. Nickname on the pitch, and if you don’t have one what would it be? I don’t have one – I don’t think so anyway?? 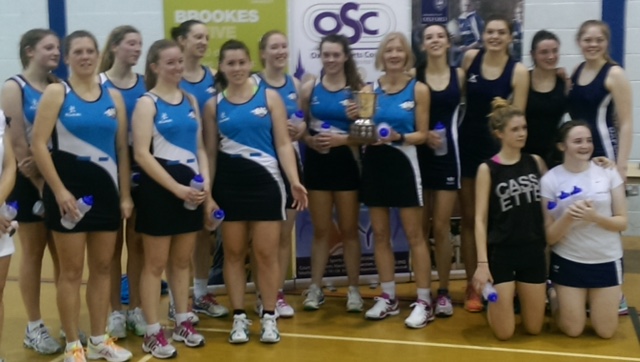 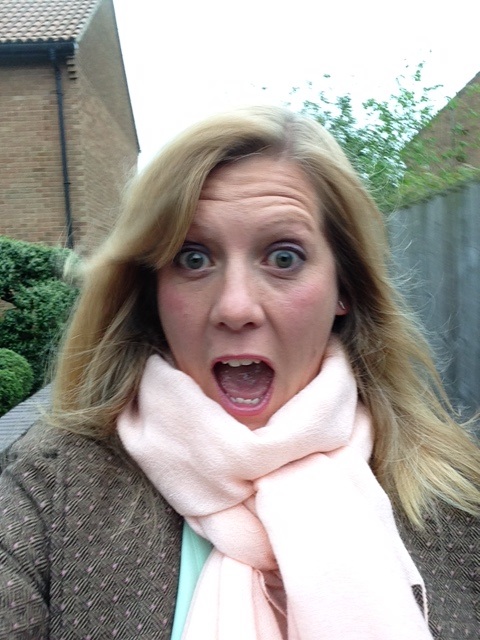 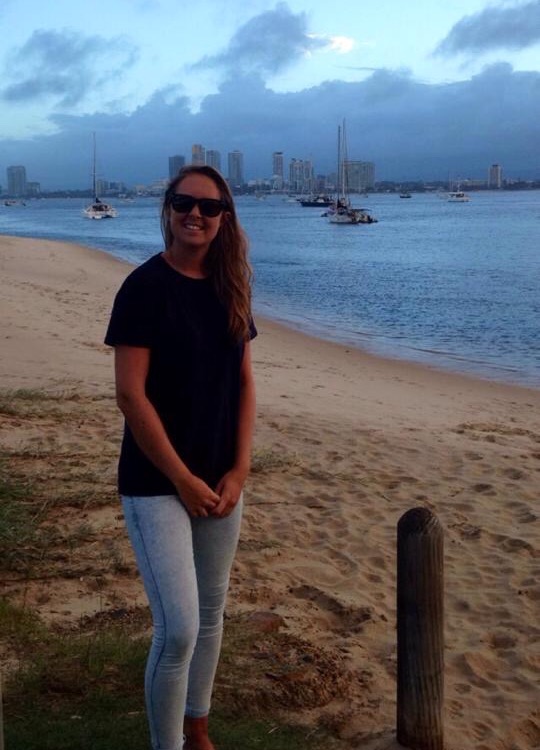 This years quiz night will take place on Friday the 14th of October....save the date!

Get Ready for the New Rules!

﻿Please find below a summary of the rule changes in netball that will be effective from the 1st of September 2016. These are INF rules specifically for international play, variations will occur at other levels such as the timing and team bench requirements. These will be specified by the individual league committees. We will use training to clarify and practice these new rules.
New Rule Summary

The Senior Regional Team are currently recruiting players for the 16/17 season. We particularly need Shooters and Centre Court Players. Please use the 'contact us' page for more details. 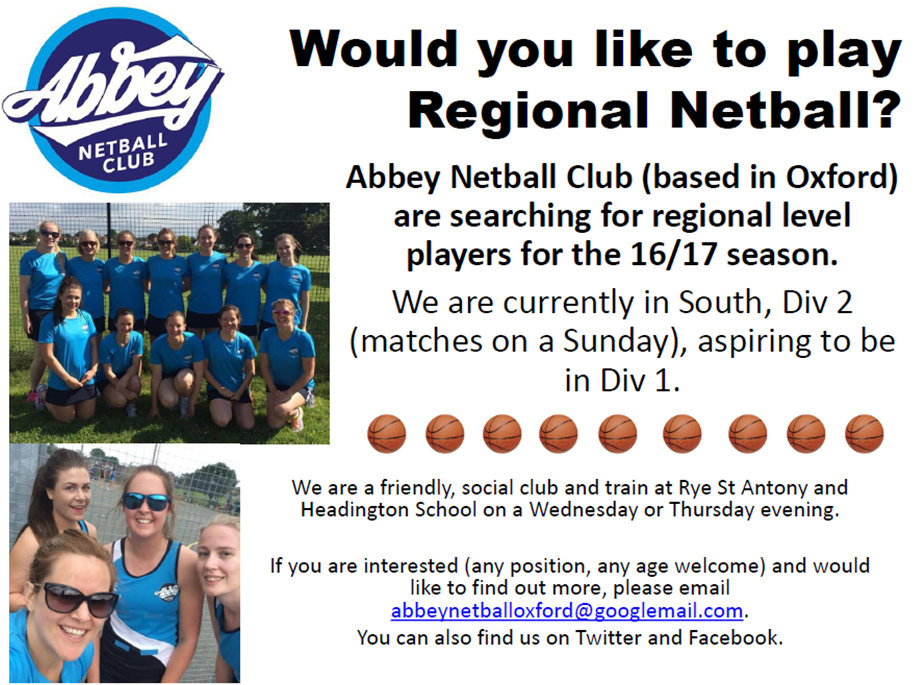 Abbey strut their stuff in Bournemouth!

The team closely missed out on the winners trophy losing to Roundwood A in the final. 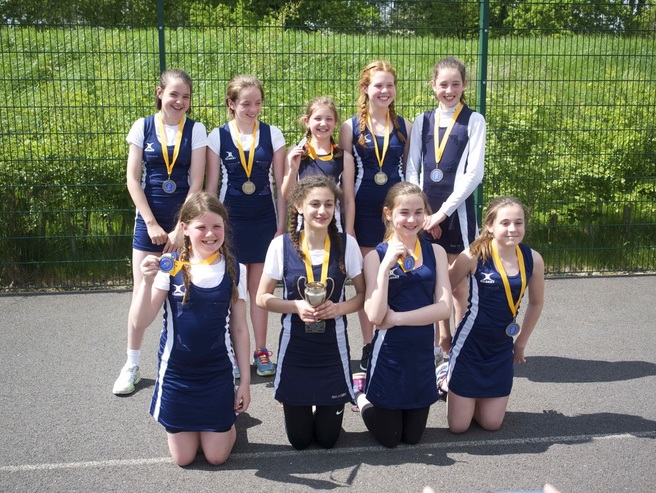 What a fantastic evening for the Abbey Awards Night. Congratulations to all of the winners and a big THANK YOU to our wonderful social secs for organizing a brilliant night.

You are officially invited to the Abbey NC End of Season Awards Night & AGM 2016!

﻿There will be a number of opportunities to join the Abbey committee for the 2016-2017 season. We have always had a very fun, active and progressive committee; who do their best in trying to create an amazing netball club for all.  We are looking to fill a number of positions at the AGM so please let us know if you are interested.
​
Find out more 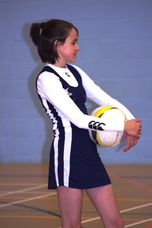 Congratulations to Lizzie, one of our U12s, who has been selected to be part of the Oxfordshire Development Group. A great achievement – well done Lizzie! 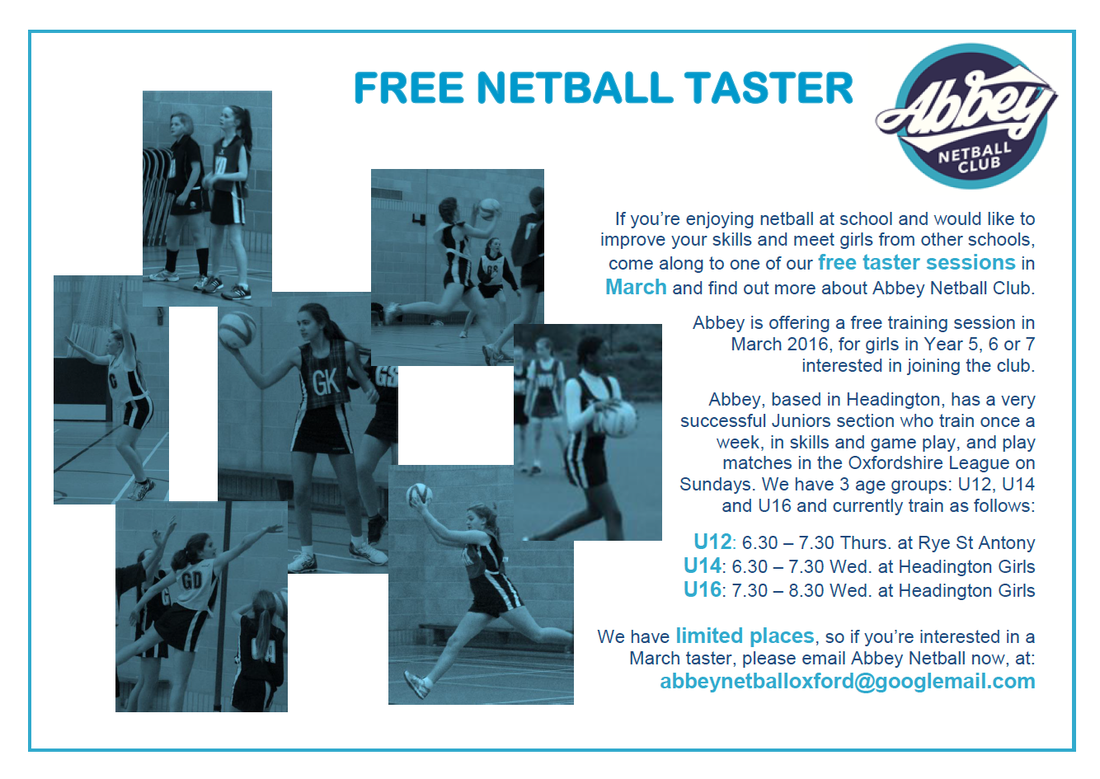 Abbey win for the town!

A great club effort on Saturday (6 Feb) secured the convincing win over Oxford University. The ‘Oxford day of sport’ (5 in total), came down to this last game where Abbey won 35-17, resulting in the ‘Town’ winning the event overall – well done Abbey!

Huge thanks go to not only the team of ‘Abbey Ice and friends’, but also to Jo our umpire, the support of some seniors, friends and family, and juniors too – who were not only very loud in their support but a couple of our U12s also made a fantastic banner.

Great pre-season session at Priority 6 over the last few weeks. One more to go next week so don't miss out! Email the Abbey account to book yourself a place. 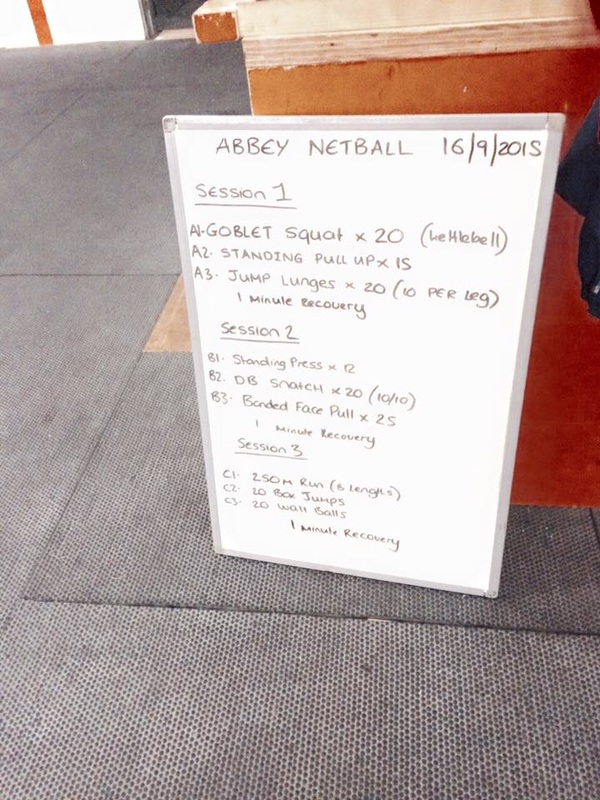 Who spotted Abbey’s Lesley Williams in the latest Netball magazine? 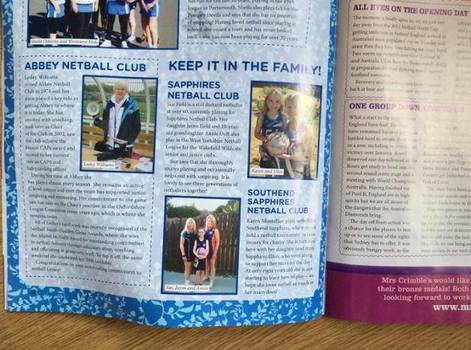 Trials for the 2015-2016 season will take place at Rye St Antony School in Oxford from the end of August. If you're looking to join a new club, or are a seasoned veteran, do come along! We ask that you try and make at least 2 trial dates.

Abbey Storm say a fond farewell to Captain Alix Gould who played her last match with the club this Thursday. We saw her off in style with a 55/12 victory. Good luck Alix, we'll miss you!

Sixteen teams, including a team from Abbey (of course!), gathered at Exeter University Sports Park facility for the SuperEx Tournament. The team fought hard and got through to the semi finals... then went for a well earned Sunday roast! Read the courtside comments for a full run down of the games. 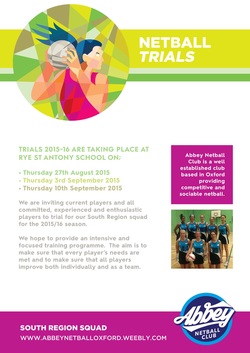 Announcing the launch of the new Abbey Netball Club dress! 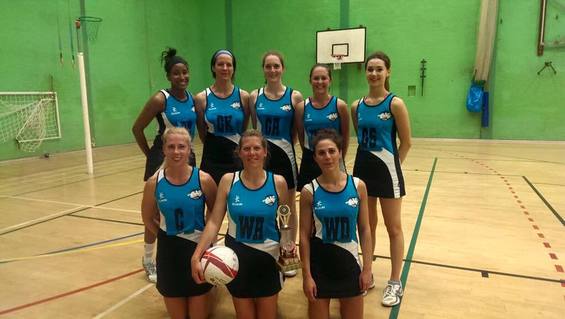 We are very pleased to announce that after a trial by the South Region team we are going to roll out the new Abbey dress for all senior teams for the 15/16 season.

As the dresses are bespoke there is a long lead time and we are therefore asking all players to order a dress now so that we have them in time for the winter season. For more information contact abbeynetballoxford@gmail.com 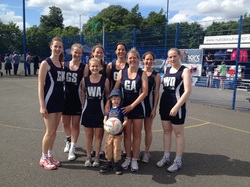 9 players recently travelled to Farnborough, with our chief supporter and mascot, Archie, to compete in a South Regional Tournament. It was a grueling but enjoyable day. Unfazed by the very early morning start, torrential downpour and lack of subs, we played hard and won the tournament by just two goals' difference! Well done team!

Jo Davies, Umpire of the Year

We are very proud to announce that, not only did our wonderful Umpire Secretary Jo Davies win Oxfordshire's Umpire of the Year Award, she also went on to win the Regional Golden Globe Award! Congratulations Jo, and thank you for all your hard work!